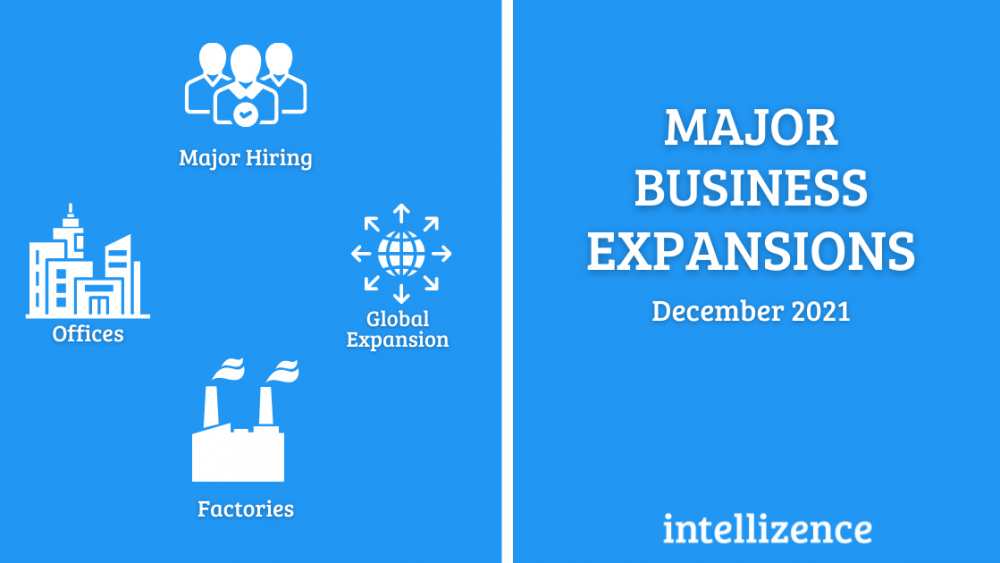 Intellizence has curated top business expansion announcements by leading companies across key sectors. There were multi-billion dollar investments in existing and new businesses in December 2021.

Some of the companies that announced major expansions in December are:

Tesla will spend more than $10 billion on its new Gigafactory in Texas and will employ tens of thousands of staff. Elon Musk tweeted that the factory will create 20,000 direct jobs and 100,000 indirect jobs.

General Motors Co is planning to invest more than $3 billion to make electric vehicles in its home state of Michigan. GM is finalizing plans for two electric-vehicle projects, one would convert its Orion Assembly plant in suburban Detroit to serve as its hub for the production of electric pickup trucks.

Amazon-backed EV startup Rivian is going to build its second factory in Georgia where it will assemble up to 400,000 electric vehicles per year. The company will start construction of the $5 billion facilities in the summer of 2022 and expects to start making vehicles there in 2024.

Ford Motor Company will invest $900 million for the modernization of its Thailand manufacturing operations with new technologies and systems. This is the company’s largest-ever single investment in Thailand. As Part of the Ford+ plan for growth and value creation, the investment supports the production of the next-gen Ranger pickup truck and Everest SUV.

The healthcare facility will invest $1 billion in new, groundbreaking facilities to improve the community’s access to high-quality care.

Tyson Foods plans to open 12 new plants over the next two years, increasing its capacity. The company expects global consumption of chicken, beef, and pork to grow by 95 billion pounds over the next decade. The company will invest $1.3 billion over the next three years in automation to help with labor costs and other areas of the business.

Intel Corporation will invest $3.5 billion to equip its New Mexico operations for the manufacturing of advanced semiconductor packaging technologies, including Foveros, Intel’s breakthrough 3D packaging technology. The multi-year investment is expected to create at least 700 high-tech jobs and 1,000 construction jobs and support an additional 3,500 jobs in the state.

Intel will invest more than $7 billion to build a new chip packaging and testing factory in Malaysia. This will help to ramp up its global footprint and to address the global chip shortage.

The new advanced packaging facility is expected to begin production in 2024 and is expected to create over 4,000 Intel jobs and more than 5,000 construction jobs in the country.