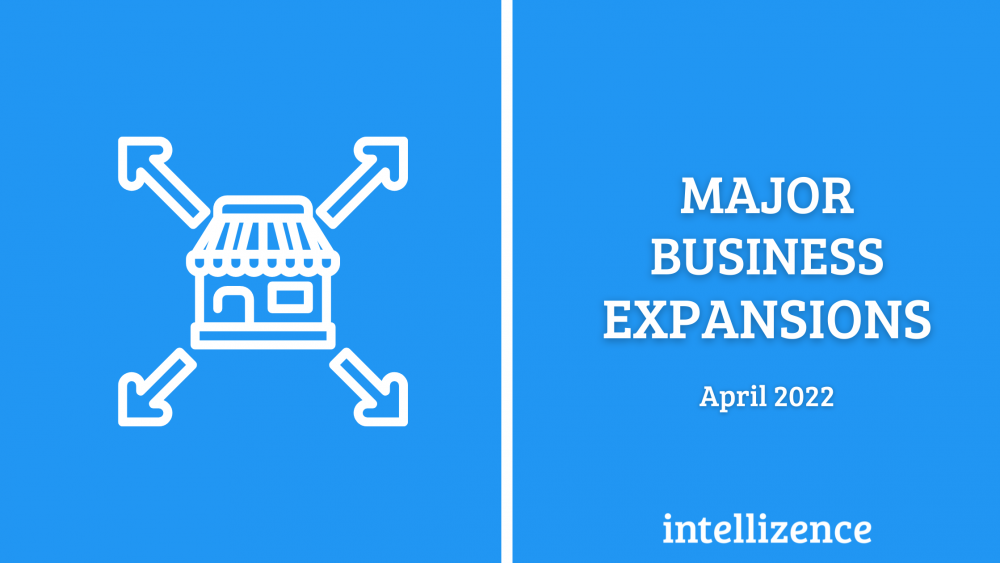 Intellizence has curated top business expansion announcements by leading companies across key sectors. There were multi-billion dollar investments in existing and new businesses in April 2022.

Some of the companies that announced major expansions in April are:

Automaker Honda has announced plans to launch 30 electric vehicles (EV) models globally by 2030 — a full lineup from commercial-use mini-EVs to flagship-class models — with a production volume of more than 2 million units annually.

Volkswagen plans to invest at least $7.1 billion over the next five years in North America and add 25 new electric vehicles there by 2030, with the aim of 50% of sales to be electric by then. The company is considering an expansion of its Chattanooga plant in the United States to produce an electric pick-up and the new ID. Buzz microbus.

GM Canada will start production at its first full-scale electric-vehicle manufacturing plant in Ingersoll, Ontario later this year. In addition, it will add light-duty pickup production and a third shift, creating more than 2,600 new jobs at its Oshawa Assembly. The company will invest more than $2 billion to transform its manufacturing operations.

Dyson has opened its new global headquarters in Singapore and plans to invest S$1.5 billion (US$1.1 billion) in expanding its research and engineering capabilities in the city-state.

The plastics recycling technology developer Encina Development Group will invest $1.1 billion to build a new manufacturing facility that will create 300 new full-time jobs. The proposed state-of-the-art facility would be the first in the region to use advanced technologies to convert post-consumer materials into a feedstock that can be used to manufacture thousands of new products.

Waste Management will be investing $825 million to add more renewable natural gas plants at landfills that will help the company accelerate various sustainability goals, including fueling the company’s entire compressed natural gas fleet with RNG by 2026.

Macy’s plans to open a new fulfillment center in North Carolina in 2024 to meet the growing demands of its omnichannel business. The company will invest approximately $584 million in this project, with an automated direct-to-consumer fulfillment capacity. Macy’s will employ nearly 2,800 workers when fully operational.

Amazon is also bringing its Amazon One palm recognition technology to all Whole Foods Market stores in Austin, Texas.

Walmart has opened a $220 million distribution center in South Carolina.

Google plans to invest approximately $9.5 billion in its U.S. offices and data centers in 2022. Along with these investments, it expects to create at least 12,000 new full-time Google jobs by the end of the year, and thousands more among our local suppliers, partners, and communities.

Meta, the parent company of Facebook, has launched two new data center projects in Texas and Missouri, pushing its total investment in U.S. data center construction and operations past $16 billion. An $800 million facility in Temple, Texas, will total approximately 900,000 square feet, while another, an $800 million facility in Kansas City, Missouri, will total nearly 1 million square feet.

Meta has also opened the Meta Store — a retail space to get hands-on experience with all hardware products — in Burlingame, California.

Amazon has signed agreements with Arianespace, Blue Origin, and United Launch Alliance (ULA) to deploy more than 3,000 satellites in space, to provide fast, affordable broadband to millions of customers around the world.