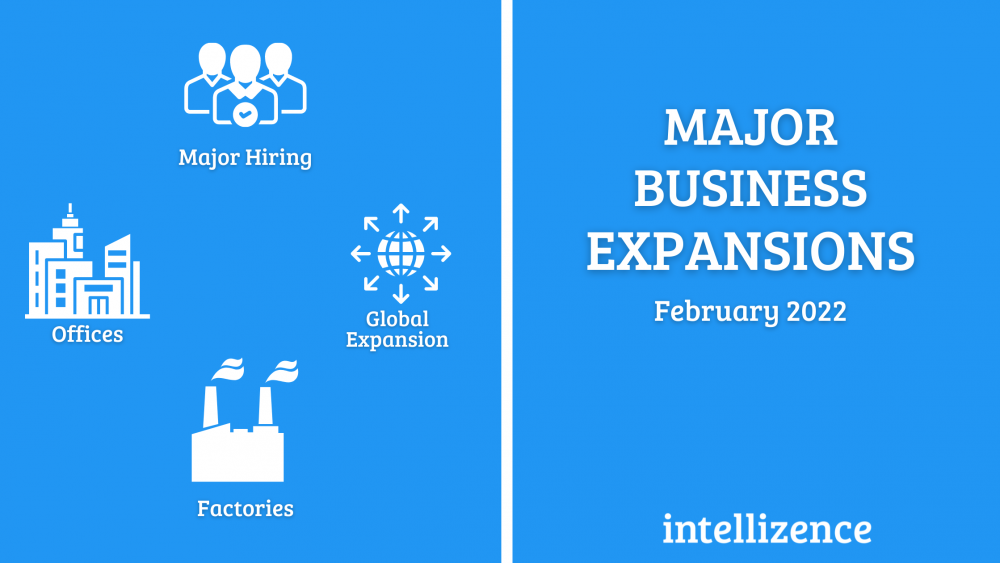 Intellizence has curated top business expansion announcements by leading companies across key sectors. There were multi-billion dollar investments in existing and new businesses in February 2022.

Some of the companies that announced major expansions in February are:

Nissan is going to invest another $500 million in upgrades at its Canton facility in order to produce two, new, all-electric vehicles for the North American market.

Ameren Missouri, the Union Electric Company of Missouri plans to invest $8.4 billion to upgrade its aging infrastructure and invest in smart technology across the state during the next five years.

The Austin-based hospital system plans to invest $953 million across multiple facilities — the single-largest one-time capital investment since it was founded. The expansion will help increase hospital capacity and expand care for the fast-growing region.

Intel plans to invest $20 billion in the construction of two new leading-edge chip factories in Ohio. The investment will help boost production to meet the surging demand for advanced semiconductors, powering a new generation of innovative products from Intel.

Amazon plans to spend $7.5 billion building a cluster of huge data centers in Auckland. The Amazon Web Services build will create 1000 jobs, and add $10.8 billion to New Zealand’s GDP over a decade and a half.

Microsoft has launched Microsoft Advertising in 29 countries across Europe and Africa. These 29 markets bring advertisers access to a new audience and enable them to reach consumers in 19 new languages.

Jellysmack, a creator-focused company that handles top names such as PewDiePie and MrBeast among others, plans to expand globally with a key focus on new markets including India, Brazil, Australia, Germany, and Mexico.