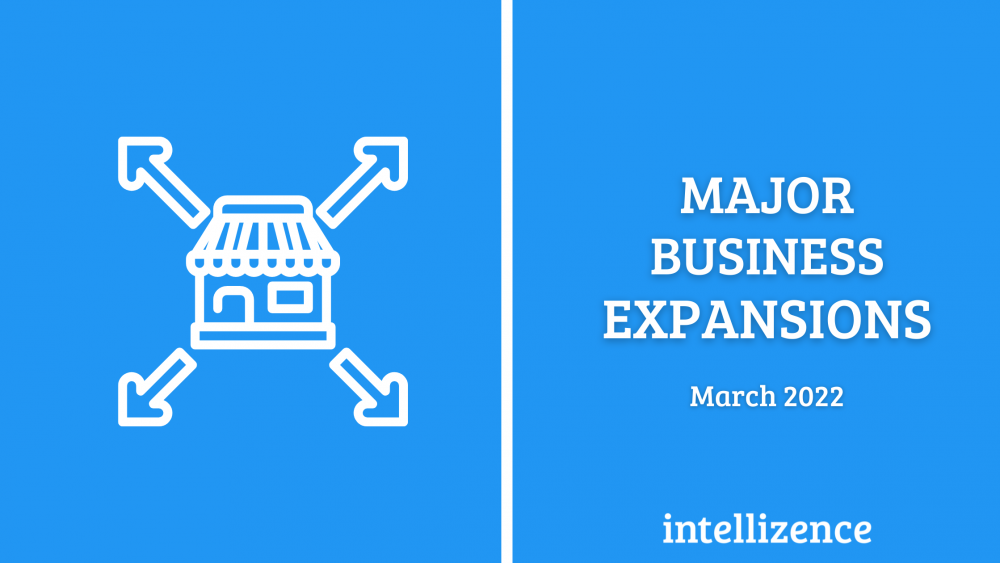 Intellizence has curated top business expansion announcements by leading companies across key sectors. There were multi-billion dollar investments in existing and new businesses in March 2022.

Some of the companies that announced major expansions in March are:

Volkswagen Group aims to transform Spain into a European E-Mobility hub with a total investment of more than 7 billion euros together with external suppliers. The company plans to develop a new cell factory to be located in Valencia, creating more than 3.000 jobs.

Japan’s Suzuki Motor plans to invest about 150 billion yen ($1.26 billion) in its India factory to produce electric vehicles and batteries.

BMW will invest more than $200 million to construct a 219,000-square-foot press shop at its South Carolina plant. The investment includes more than 200 new jobs.

Dyson has opened its new global headquarters in Singapore and plans to invest S$1.5 billion (US$1.1 billion) in expanding its research and engineering capabilities in the city-state.

Shell will invest up to 25 billion pounds ($33 billion) into the energy system in Britain over the next decade. Over 75% of the investment will be funneled into zero-carbon products and services.

Bayer plans to invest 1.4 billion euros ($1.55 billion) in its pharmaceutical manufacturing sites in the coming years. The money will be directed toward adding innovative technologies, new production facilities, and digitization.

Johnson & Johnson is investing €35 million in its Limerick facility that will see the company create 200 jobs over the next three years. Johnson & Johnson Vision, the pharmaceutical giant’s eye health division, is expanding contact lens manufacturing at the site to address the growing demand for its intraocular lenses.

LG Energy Solution plans to invest more than $4.5 billion over the next four years to expand its battery production capacity in the United States.  In addition to a new battery facility, the company and automaker GM are discussing plans to build a second joint venture plant in the United States.

Alfanar, a Saudi Arabian company engaged in the manufacturing and trading of electrical products, has invested $1.33 billion in a UK project to produce more than 190 million liters of sustainable aviation fuel.

POSCO Holdings has invested $839 million in the Lithium business in Argentina. The Group is Argentina’s first to produce lithium hydroxide for batteries throughout the entire process, from the acquisition of mining rights to exploration to the construction and operation of a production plant.

Target will invest as much as $5 billion this year in new stores, remodeling efforts, and other measures. It plans to open 30 new stores — ranging from urban locations like New York’s Times Square to midsize stores in the suburbs — and new several sortation centers.

The Latin American e-commerce giant will invest 17 billion reais ($3.44 billion) to expand and consolidate its Brazilian business in 2022.

Walmart Canada is investing over $118 million to build a new facility near Calgary, creating an additional delivery hub for customers in western Canada. Measuring approximately 430,000 square feet, customers will see better product availability and quicker service, whether they choose to shop in-store or online.

Amazon Web Services (AWS) is to invest more than £1.8 billion over the next two years in building out its UK datacentre presence, as demand for its public cloud services continues to grow.

Meta, the parent company of Facebook, is investing over $1 billion in building a new data center in Spain to help build the foundation of its metaverse, along with plans to hire 2,000 staff in the region to push development. Meta will also invest $800 million in a nearly 1-million square foot hyperscale data center in Kansas City, Missouri.

Vantage Data Centers will invest CAD$900 million ($712 million US) to rapidly scale its Canadian operations, including the development of a third campus in Montreal and the expansion of two existing campuses in Montreal and Quebec City.