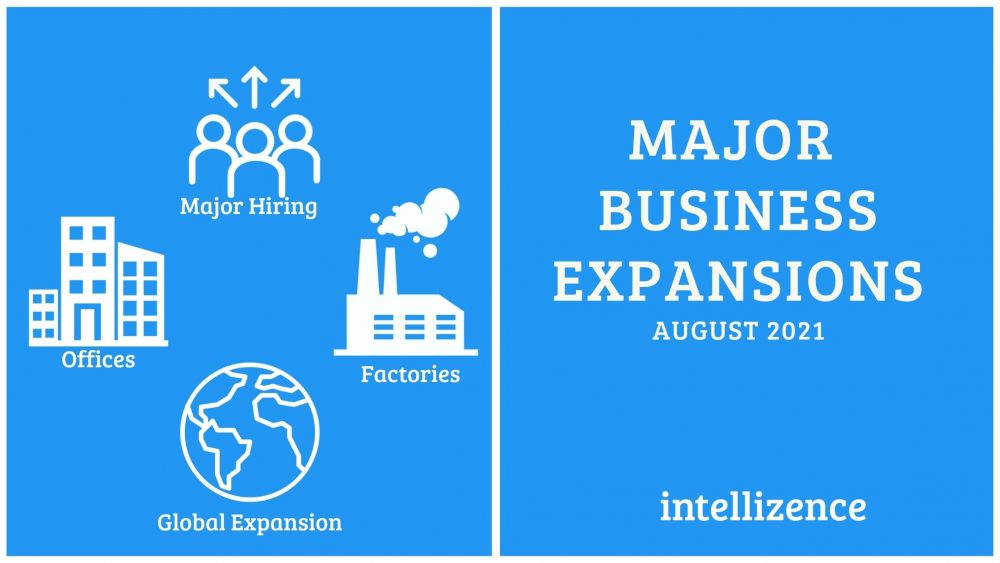 Intellizence has curated top business expansion announcements by leading companies across key sectors. There were multi-billion dollar investments in existing and new businesses in August 2021.

Some of the companies that announced major expansions in August are:

Ford Motor Co has doubled its production target for the F-150 Lightning in response to early demand for the full-sized electric pickup truck ahead of its 2022 launch. The company plans to spend an additional $850 million to meet that target.

Waymo plans to build a trucking hub for its autonomous semi-trailer trucks on a nine-acre site near Dallas-Fort Worth, Texas. The company is also partnering with rental truck company Ryder on fleet management as it looks to grow the delivery and logistics portion of its business.

Lithia & Driveway, the leading provider of personal transportation solutions in North America, plans to expand into Canada through a new partnership with Toronto-based Pfaff Automotive Partners.

Tyson Foods will invest $300 million to build a new, fully-cooked plant in Danville, Virginia. The project will help the company to meet the increasing demand and deliver on its strategy of accelerating long-term growth. The new facility is expected to create nearly 400 jobs when production begins in the spring of 2023.

Anheuser-Busch, the country’s largest brewer and a leading American manufacturer, will invest $64 million at its Los Angeles brewery that will enable sustainable innovations and create jobs. This investment will help increase its new product capabilities and capacity to meet consumer demand while reducing its overall environmental footprint with the installation of new solar panels and utilities and emissions reductions.

Amgen plans to build its second new multi-product drug substance manufacturing plant in the U.S in North Carolina. Amgen has committed to a total investment of $550 million and the establishment of the plant will bring up to 355 full-time jobs to the region by 2029, including engineers, technicians, quality, management, and administrative roles.

Intuitive Surgicals ($500 Million)PepsiCo is to begin construction of its $257 million food manufacturing plant in Sroda Slaska, Poland, which will be the company’s largest and most sustainable plant in Europe. The facility will span over 54,700 square meters and create an estimated 450 jobs.

Intuitive, a pioneer in robotic-assisted surgery and a global leader in minimally invasive care, investing more than $500 million in its current campus in Gwinnett County, creating approximately 1,200 jobs. The company plans to grow its campus to include more than 750,000 square feet of manufacturing and engineering operations, state-of-the-art training facilities for surgeons and hospital care teams, and administrative offices.

The Wendy’s Company and REEF – the largest operator of mobility, logistics hubs, and kitchens – plan to open and operate 700 delivery kitchens over the next five years across the U.S., Canada, and the United Kingdom. REEF will become the first Wendy’s franchisee in the United Kingdom.

Walmart has launched GoLocal, a last-mile delivery service for other retailers. The service allows other merchants, both large and small, to tap into Walmart’s own delivery platform to get orders to their customers.

Google is to invest $10 billion over the next five years to strengthen cybersecurity in the US. The company will also, through the Google Career Certificate program, train 100,000 Americans in fields like IT support and data analytics, learning in-demand skills including data privacy and security.

Facebook plans to construct an $800 million, new solar-powered data center in Mesa, Phoenix, Arizona. This will provide approximately 100 new jobs and 1,400 construction jobs. The data center will house switches, routers, servers, storage systems, and other equipment. Power will be supplied from three new solar facilities in Pinal County along with the Salt River Project.

TELUS has expanded its next-generation 5G network to Medicine Hat and Brooks as part of its larger $14.5 billion investment in infrastructure and operations in Alberta through 2024. Local residents and businesses will now have access to TELUS’ lightning-fast 5G network, which will contribute to improved health and educational outcomes for Albertans, in addition to enabling an entrepreneurial spirit and unleashing human productivity.