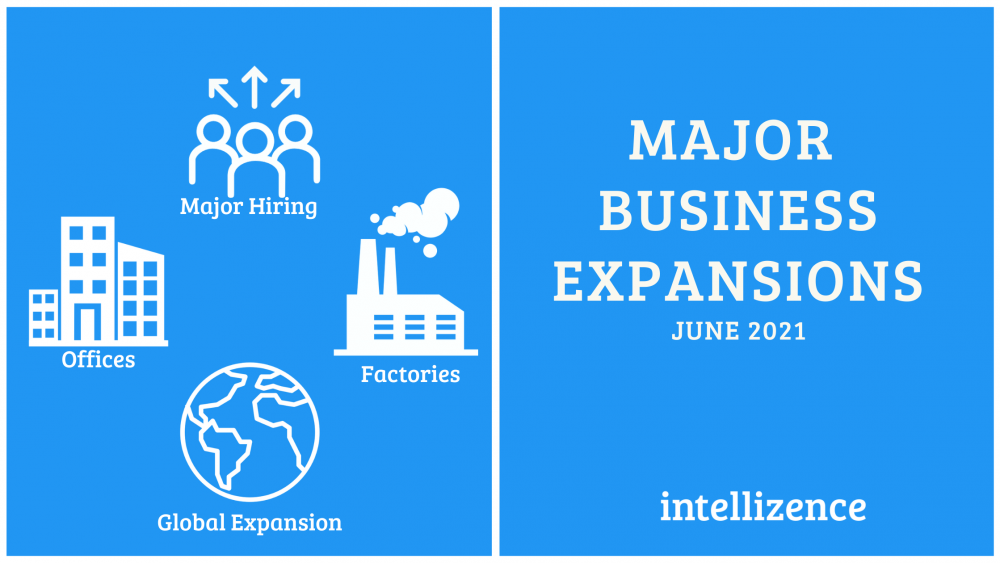 Intellizence has curated top business expansion announcements by leading companies across key sectors. There were multi-billion dollar investments in existing and new businesses in the month of June 2021.

Some of the companies that announced major expansions in June are:

Ford has started the production of the all-new 2021 Bronco in its Michigan Assembly Plant. The company has invested $750 million and added approximately 2700 jobs at the factory to build the sixth-generation Bronco.

Fehrer Automotive has invested $6 million to expand its 200,000-square foot Gadsden plant. The company is one of the worldwide leading specialists for vehicle interior components, and the Gadsden plant began by supplying Mercedes Benz in Tuscaloosa and Volkswagen in Chattanooga with two production lines.

A global wine and spirits company, E. & J. Gallo Winery will build a new state-of-the-art production facility and distribution center in Chester County to support future business growth and its long-term innovation plans. The $423 million investment will create 496 new jobs over the next eight years.

Dreyer’s Grand Ice Cream plans to invest over $145 million to expand its production facility in Fort Wayne and add up to 145 jobs by the end of 2024.

Brightmark, the global waste solutions provider, will build the world’s largest advanced plastics recycling and renewal facility in Macon-Bibb County, Georgia. The company is investing more than $680 million in a new plant intended to fully utilize the 5.3 million square-foot site. It will employ a state-of-the-art and proprietary plastics renewal process that sustainably recycles all plastic waste that has reached the end of its useful life.

Autocam Medical, the medical device company, is investing $60 million to build a new plant near Grand Rapids, Michigan, creating 250 new jobs by 2024. The plant will help meet the increased demand for Autocam’s products, which are created for leading medical companies including Stryker and Johnson & Johnson.

U.S.-headquartered semiconductor manufacturer GlobalFoundries is investing $4 billion in a new fabrication plant in Singapore, to meet the unprecedented global demand for chips. The new facility will be developed in partnership with the Singapore Economic Development Board and with co-investments from committed customers.

US-based 1366 Technologies, which is backed by Bill Gates’ Breakthrough Energy Venture, intends to invest $300 million to establish a 2GW wafer and cell manufacturing facility in India.

Amazon is opening a new 180,000-square-foot delivery station in League City Texas in 2022. The new delivery station will power Amazon’s last-mile delivery capabilities to speed up deliveries for customers around Galveston County.

Instacart, the leading online grocery platform is expanding to Quebec. Customers in Montreal can now have the groceries and goods they need to be delivered from the store to their door in as fast as an hour from nearly 25 Costco, Les Aliments M&M, and Walmart locations.

Pinterest has opened an office in Mexico City, which includes its first engineering hub in Latin America. The company will hire more than 50 people to fill engineering and sales roles. The engineering team will include people working on – internal tooling; front-end engineering for Android, iOS, and the web; and Pinterest’s human evaluation platform for its trust and safety team and to label data for machine learning algorithms.

The global auto supplier Flex-N-Gate is expanding with a new manufacturing facility in Troy, supported by a $1 million Michigan Business Development Program grant. The $52 million investment will create 245 Michigan jobs while strengthening Flex-N-Gate’s footprint in Michigan.