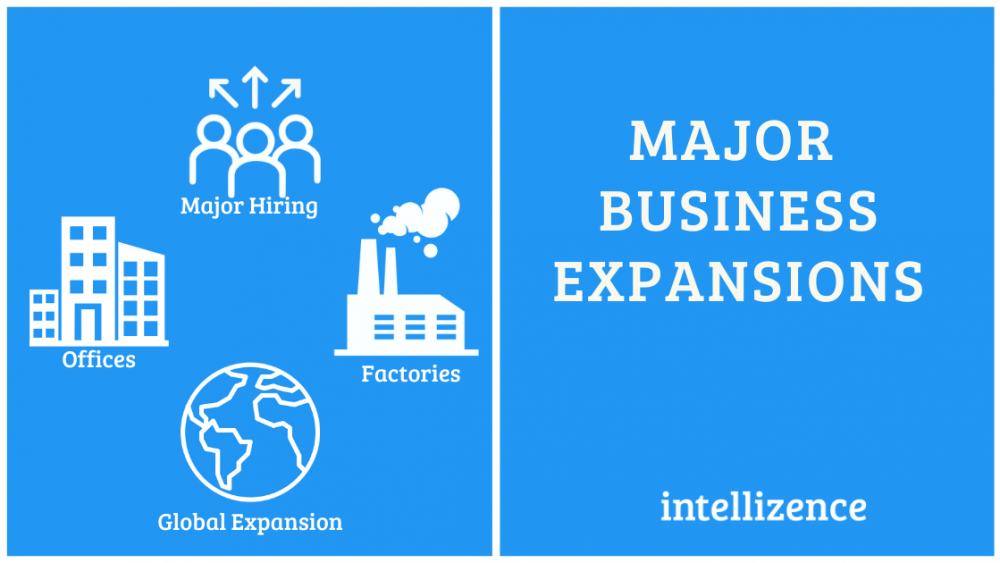 Intellizence has curated top business expansion announcements by leading companies across key sectors. There were multi-billion dollar investments in existing and new businesses in 2021. Using the Intellizence Business Expansion dataset, we mapped all companies investing $ 500 million or more, to expand their business.

Chinese phone maker Xiaomi is entering into electric vehicles with a $10 billion (£7.3 billion) investment over ten years. The tech giant’s goal is to “offer quality smart electric vehicles.” It will spend an initial 10 billion yuan, equivalent to about $1.5 billion, to launch the business, expanding its investment in the coming years.

Traton, a subsidiary of Volkswagen AG, is a leading commercial vehicle manufacturer with brands MAN, Scania, Volkswagen Caminhões e Ônibus, and RIO. The company plans to invest $1.8 billion in research and development for e-mobility by 2025 while scaling back resources dedicated to conventional drives.

To meet the growing demand for lithium-ion batteries, Itavolt, the electric vehicle battery startup, plans to build the largest battery factory in Italy. Itavolt will be investing 4 billion euros ($4.9 billion). The company will employ 4000 workers directly, another 15,000 indirectly, and will have a dedicated research and development laboratory.

As a part of its Green Field project, LG Energy Solutions plans to invest $4.5 billion to expand its battery production capacity in the US alone. The investment will add 4,000 jobs as LG Energy Solution considers building at least two new plants in the U.S.

SMIC plans to jointly invest in a $2.35 billion project with the government of Shenzhen to make 40,000 wafers per month.

German chemical manufacturer Covestro AG is expanding its plant in Baytown with a $1.69 billion investment. The company would build new manufacturing units for polyurethane and polycarbonates at the company’s existing manufacturing site near Houston. Covestro would be employing 2,000 workers before the new units enter commercial operations in 2027.

Walmart will invest $350 billion on products manufactured, grown, or assembled in the US – plastics, textiles, small electrical appliances, food processing, pharmaceutical & medical supplies, and Goods Not For Resale (GNFR).

Target is going to invest over $4 billion annually to enhance fulfillment services and store experience. Target will accelerate new stores opening, remodel existing ones, strengthen its supply chain, and increase its ability to quickly fulfill online orders. It will add two distribution centers to support store replenishment, near the New Jersey-Delaware border and in the Chicago area.

Intel plans to spend $20 billion to build two new factories at an existing campus in Chandler, Arizona. The new semiconductor fabrication plants are expected to create over 3,000 permanent high-tech, high-wage jobs, and over 3,000 construction jobs.

South Korean electronics giant Samsung is planning to invest over $17 billion to build an advanced new logic chip-making plant in Arizona, Texas, or New York. The plant will be making processors as advanced as 3nm and would be its third worldwide to use extreme ultraviolet lithography technology. The proposed plant would employ up to 1,900 people and aims to be operational by October of 2022.

Google will be investing $7 billion in offices and data centers across the U.S., down from the $10 billion last year. The latest investment includes expansion plans for data centers in Nebraska, South Carolina, and Texas, and offices in Atlanta, D.C., Washington, Chicago, and New York. The investments would create at least 10,000 new full-time jobs.

Equinix, the world’s digital infrastructure company, is investing $3 billion for the expansion of its xScale data center program, including projects currently under development in Brazil, France, Japan, and other markets. Equinix xScale data centers provide critical nexus between hyperscale companies and the vast ecosystem of Equinix customers. The expansion will serve the growing demands of hyperscale companies that are deploying infrastructure at Equinix.