Changes are inevitable in the business world. Companies are responding to changes in their business environments through various strategic initiatives and programs. Global macro trends are shaping the future of business.

The Intellizence AI platform for Company and Market Intelligence monitors hundreds of growth and risk signals in thousands of public and private companies.

Intellizence has identified major initiatives and issues faced by the largest and fastest-growing companies in 2022. Businesses should be aware of these trends and use them to their advantage. 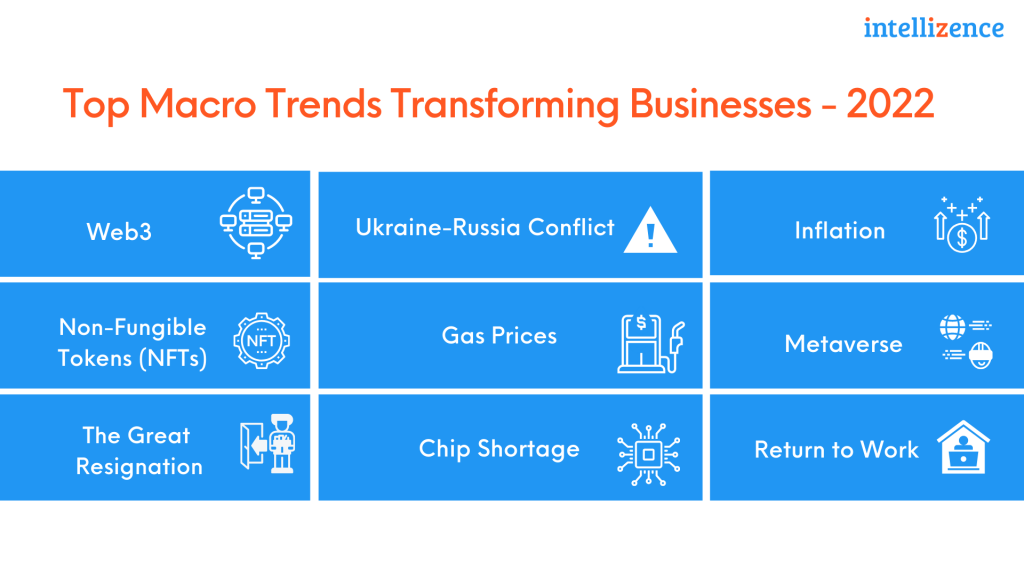 Economic Fallout Due to Ukraine-Russia Conflict

Russia’s invasion of Ukraine has left many companies clambering to ensure the safety of their employees while bracing to face the disruption they would face due to sanctions imposed on Russia. Beyond the humanitarian crisis, the entire global economy is feeling the effects of slower growth and rising inflation. Moreover, the global financial markets are highly volatile causing irreparable losses to investors.

Many companies are re-evaluating their businesses, with some exiting from the country while others suspending operations.  Some of the leading companies are:

The metaverse is an amalgamation of physical, virtual, and augmented reality (AR) that blurs the line between the real and virtual world. It is the future of gaming, meetings, socializing, and more. Video games like Roblox and Fortnite have already implemented the metaverse, although in a limited form. Additionally, people can work, shop, do business, and more in a virtual space. Cryptocurrencies are used for virtual transactions adding to the metaverse experience. More than a trend: metaverse is fast becoming a necessity for businesses. Businesses need to develop a plan to move their business to the virtual world.

Many businesses are moving towards the metaverse. Some of the leading companies working on metaverse are:

Net Zero refers to a balance between the global greenhouse gas (GHG) emissions and their removal from the atmosphere. Governments across the globe are introducing stricter regulations to reduce carbon footprints to control climate change. Leading investors and organizations like Microsoft, Intel, and Amazon have committed to reaching Net Zero emissions by the end of the decade. Some of the leading institutions and companies that are taking the initiatives to attain Net Zero-emission are:

Electric vehicles are gaining popularity and looking more promising. With increased environmental awareness and the demand for reduced carbon dioxide (CO2) emissions, individuals are moving from fuel-powered vehicles to electric vehicles. In addition, the government is offering increased subsidies and grants, tax incentives, and other added benefits, giving a boost to the electric car market. Some of the companies launching electric vehicles in the coming years are:

Over the past few years, we have seen a major shift in Environmental, Social, and Governance (ESG) initiatives such as climate change, sustainability, corporate governance codes, executive compensation disclosures, say-on-pay, and board gender diversity mandates.

Companies are acquiring and launching new businesses to address emerging opportunities related to ESG initiatives. Eventually, ESG will be a gamechanger for organizations both in the public and private sectors. They will stand to gain a competitive advantage by embracing ESG as part of their company culture.

Adding to the inflation, the current Ukraine-Russia war stands to potentially make the situation worse with an unstable stock market and rising oil prices.

Web3 incorporates the very fundamentals of blockchain, i.e. decentralization and token-based economics. However, it will be decentralized – rather than controlled by governments and corporations, and to a certain extent connected to the concept of the “metaverse.”

An NFT is a digital asset with unique identification codes and metadata that differentiate them. They cannot be traded or exchanged at equivalency, like crypto. They can be used to represent real-world items like music, artwork, and real estate. Some of the companies that offer NFT are:

With the third wave of Covid-19 on the wane, most companies are slowly switching back to working from the office. They are asking employees back to the office or are making plans to do so in the near future.

According to the U.S. Department of Labor, nearly 4.4 million Americans quit their jobs in February. Both resignations and job openings were near record highs in February, and the layoff rate was near a historic low. What started during the pandemic the “Great Resignation”, still continues. With the job market looking up people are ready to quit their jobs at near-record levels in search of better opportunities.

According to Randstad NV, a global provider of employment services, The Great Resignation shows no sign of easing and a dwindling supply of workers may be here to stay.

A vaccine mandate is a law that says one must be vaccinated if they want to work, travel, or even attend an event. A government or company cannot force anyone to get vaccinated, but the vaccine mandate gives businesses the authority to legally stop a person from entering their building or using their services. A vaccine passport is mandatory today as travel resumes, and countries have begun requiring proof of vaccination as a condition of travel. Many businesses are offering incentives to get their employees vaccinated.

Companies across the U.S. are struggling to hire, and workers are leaving jobs at record rates. It has led to companies raising entry wages to attract and retain workers. To match the proposed federal minimum wage increase, many companies have made $15 an hour their starting wage. Minimum wage workers across the US will enjoy a pay raise in 2021.

Businesses have shifted their focus to automated delivery systems today. The advances in automated delivery will soon depend on automatically-operated drones and vehicles to perform deliveries. Automating delivery has many benefits in terms of time, money, and customer service. Some of the companies that have already started with automated delivery are:

The future of work will be hybrid, wherein each company will work out its own work strategy, as employees are not ready to give up remote work. Some companies will be implementing the hybrid model of working partly on-site and partly remote, whereas other companies will have employees full-time remote or full-time on-site. A number of top companies are adopting the hybrid model, such as Google, Amazon, Atlassian, Facebook, and Microsoft, to name a few.

Moreover, many tech companies are improving or adding technology and display tools that are essential for maintaining team productivity and collaboration.

The global chip shortage is due to greater demand for integrated circuits or semiconductor chips than supply which has impacted many industries. There is an increased demand among consumers for cars, graphics cards, video game consoles, computers, and several other products that require semiconductors. Some of the organizations facing chip shortage are:

BNPL is an interest-free short-term financing loan that allows one to buy a product and pay for it in equated monthly installments (EMI). It is quickly becoming a popular payment option, especially when shopping online. There are a number of companies, including banks, lenders, fintech, and wallets that are offering to finance purchases made.

The global supply chain was disrupted due to the pandemic that caused industries around the world to shut down. Both local businesses and large organizations have felt the impact. Major supply chain challenges are scarcity of raw material, shortage of truck drivers, port congestion, changing consumer demand, and increased freight costs.

Economic Fallout Due to Ukraine-Russia Conflict

Russia’s invasion of Ukraine has left many companies clambering to ensure the safety of their employees while bracing to face the disruption they would face due to sanctions imposed on Russia. Beyond the humanitarian crisis, the entire global economy is feeling the effects of slower growth and rising inflation. Moreover, the global financial markets are highly volatile causing irreparable losses to investors.

Many companies are re-evaluating their businesses, with some exiting from the country while others suspending operations.  Some of the leading companies are: